He thereupon commended himself with all his heart to his lady Dulcinea, beseeching her to succor him in this peril; and, being well covered with his shield and with his lance at rest, he bore down upon them at a full gallop and fell upon the first mill that stood in his way, giving a thrust at the wing, which was whirling at such a speed that his lance was broken into bits and both horse and horseman went rolling over the plain, very much battered indeed…”

FOLLOW DON QUIXOTE IN A FASCINATING ROUTE BATHED IN HISTORY AND LEGEND!

Alcalá de Henares, a small city located barely 40km away from Madrid was the birthplace of Miguel de Cervantes, author of Don Quixote.

The university and the old town are both part of the UNESCO Heritage Sites. The University was founded in the 16th century and the city of Alcalá became the first planned university city in the world. Many cities in Europe and in the world followed it as a model. 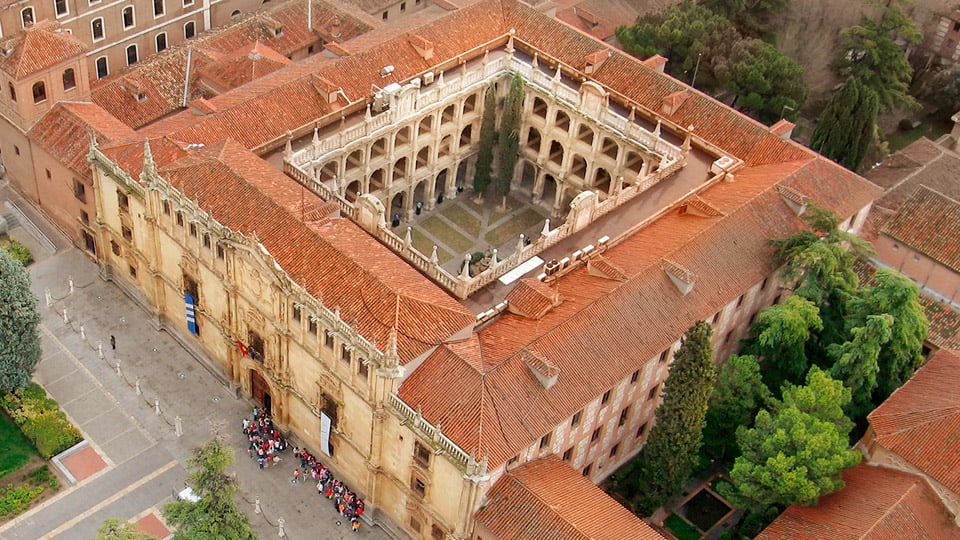 The Calle Mayor has witnessed the social and economic life since the 12th century and it is the best preserved medieval arched street in Spain.

In this street you will find Cervantes’ Birthplace Museum where you will learn about his early years and also how the daily life of people back in the 16th and 17th century looked like.

After visiting the city and contextualizing the unique life of Miguel de Cervantes, begin the route through the main landmarks of Don Quixote.

Visit some of the most characteristic and legendary villages of La Mancha. Of course, stopping at the famous windmills, which were the object of Don Quixote’s battle against the giants.

These villages still retain their original charm with their whitewashed houses and interior courtyards, as well as their palaces and castles. The traditions of our noble knight are present throughout the route.

Visit Argamasilla de Alba, where Miguel de Cervantes was imprisoned. Legend has it that it was precisely while he was deprived of his freedom that he wrote Don Quixote.

Pass through the Lagunas de Ruidera National Park, designated by UNESCO as a Biosphere Reserve and Special Protection Area for Birds.

We also recommend a visit to Tomelloso. Although there are many towns that claim the honor of being that “Somewhere in La Mancha, in a place whose name I do not care to remember,” mentioned by Cervantes in his renowned novel, experts and literary critics agree that that place in La Mancha is Tomelloso.

Finish the day in Campo de Criptana, famous for having 10 windmills in its municipality. The windmill of Burleta is the best preserved in the region.